When Stephani approached me to produce a cover for this book I knew it would be a Challenge. 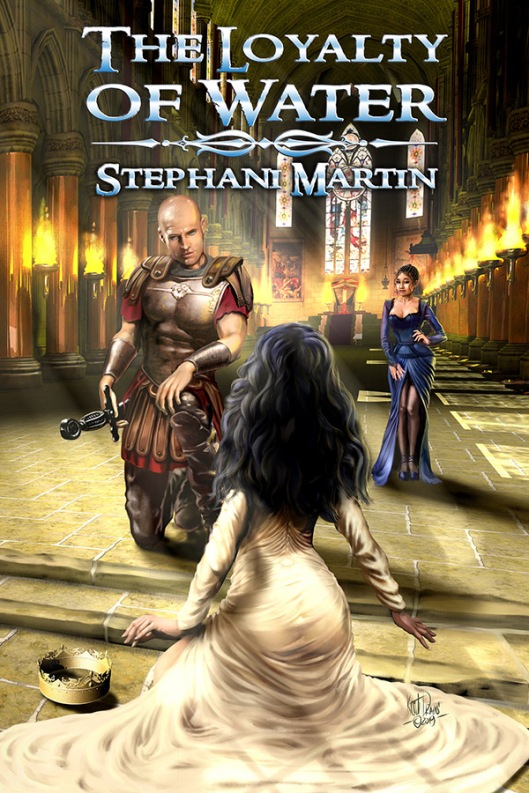 However, in the end, I feel I produced one of my best covers. The story’s conflicts characters and environments meant I had plenty to work with. The influences of Frank Frazetta and Todd Lockwood, as well as Alan Lee and Peter A. Jones,  are very prevalent in this painting, though I’m always trying to add my own twist.
If you want to check the book out, go here.

Women with complex backgrounds and motivations, who are determined to achieve their goals. Set in an utterly convincing world engaged in wars and power struggles, magical powers and weaponry salvaged from a bygone higher tech age, the tension and excitement of these books is incredible. 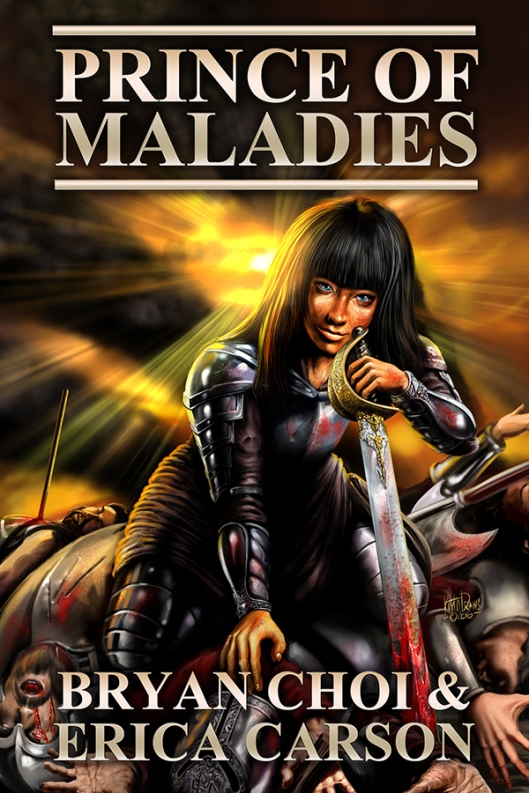 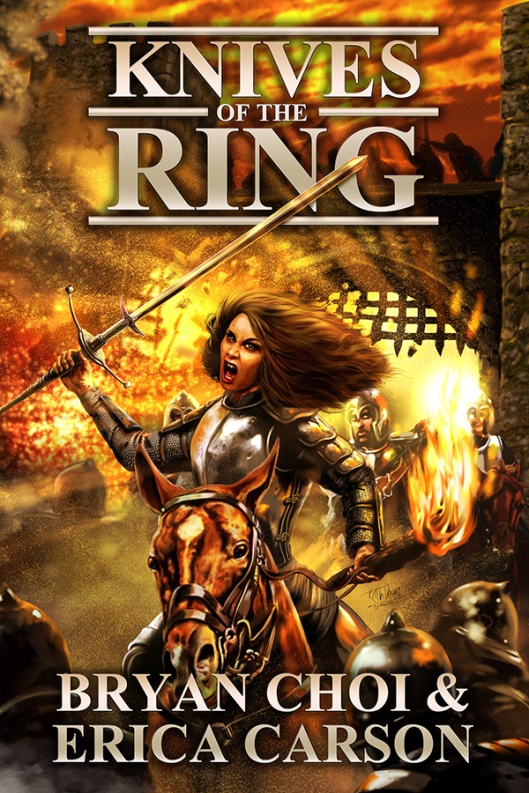 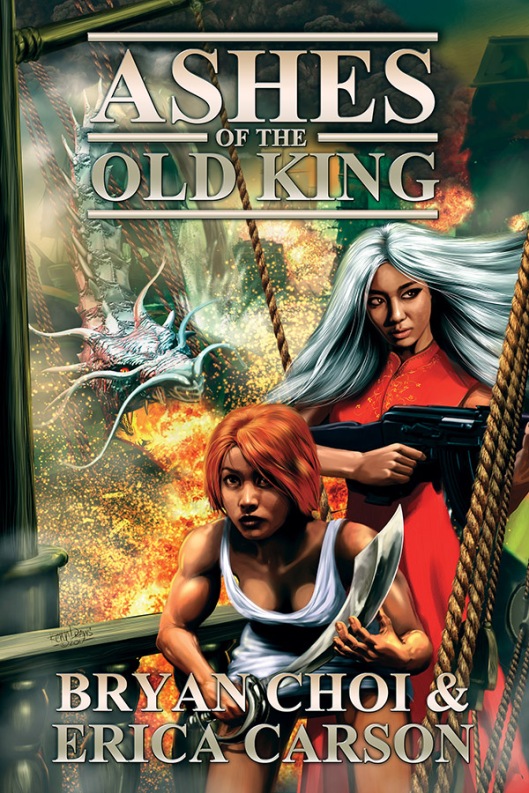 Once again you can probably see the influence of Frank Frazetta and Todd Lockwood, as well as Alan Lee and Peter A. Jones.

You can read about the Authors and see more of their work here: http://storygamers.com/about/
Poster and Prints are available here: https://keithdraws.deviantart.com/gallery/

With these covers, I’m doing my best to push the envelope.

Action, intrigue and amazing vistas are all considerations so for this image, I imagined the Starcruiser Polaris bursting out of a nebular, guns blazing,  and I set about it. After a few false starts, this was the result. 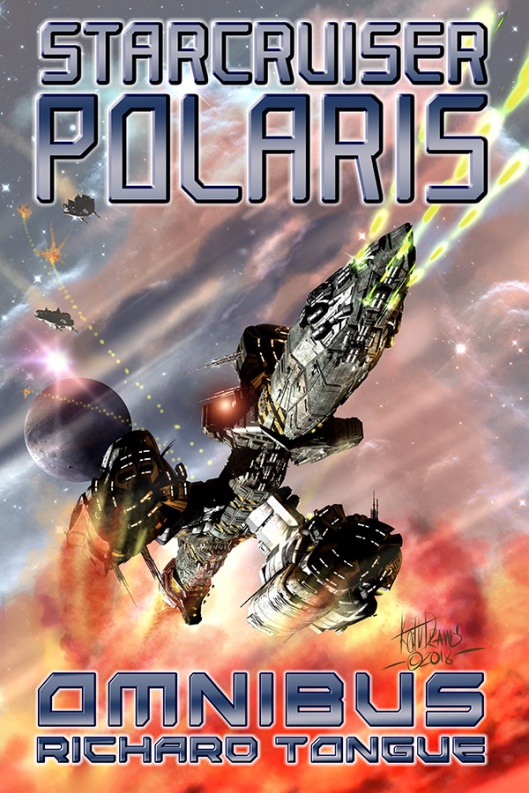 I love the idea that space has so many things we don’t understand, so many things we can’t even imagine (though I’m trying). I’m utterly awestruck when I think about this stuff and even more so when I’m asked to illustrate some of these incredible ideas by fine authors like Richard.

I do my utmost to infect the viewer with these feelings too just as my favourite artists did to me. People like : (in no particular order )  and I have to thank them: Todd Lockwood, Jim Burns, Chris Foss, Chris Archilleos, Peter Elson, Roger Dean, Rodney Mathews, Frank Frazetta, Peter A Jones and many more, without whom I would be painting landscapes.

This cover wraps the set as one book and so is no doubt a bargain you should not miss.

Check out his Author page on Amazon: https://goo.gl/Q1TCCZ

And his personal Blog: http://richardtongue.blogspot.com/

When Gurin got in touch with me he told me:

“I’ve seen your work for E. M. Foner’s Union Station series and I think your style is exactly what I am looking for.
I have the concept for what I want, based on an event in the book, and it does include a beautiful woman which I want to be sexy, innocent, funny but not sexual. That is why I think your work on Union Station is spot on.”

I liked the sound of this and after reading the book the image almost created itself in my mind. It’s an unusual book that tells the tale of a very different alien abduction. The protagonist has a lot of extraordinary experiences to deal with and uses his razor-sharp, yet gentle wit, to carry himself (and the reader) through the journey of a lifetime.
Guerin’s original idea was to have one of the main characters posed as I’ve shown her in front of the shuttle and while I liked this I was afraid it wouldn’t indicate enough  of what the reader would experience so I decided to feature some of the more spectacular scenery from the book too and after I’d worked out a layout, we both agreed this was the way to go.

I’m sure if you care to look you’ll see some of the influences there. My buddy Jim Burns (he’s so good at alien tech and aliens in general that I always have to look through his stuff  just try and get into that headspace) , Chris Foss (for the sheer massive scale he can imbue in his work), Peter A. Jones ( for the dynamism and the colour), Todd Lockwood (whose painting technique and compositional sense astounding to me) and I’m of course trying to channel a little Frank Frazetta there (and I feel like maybe I succeeded a little this time).
I have to admit to being very pleased with the end result.

You can pick the book up here:

and posters are here: http://keithdraws.deviantart.com/

Frank Frazetta has always been a hero of mine.

So when I get the chance to produce work in the genre of Sword and Sorcery Fantasy Art I jump at the opportunity. 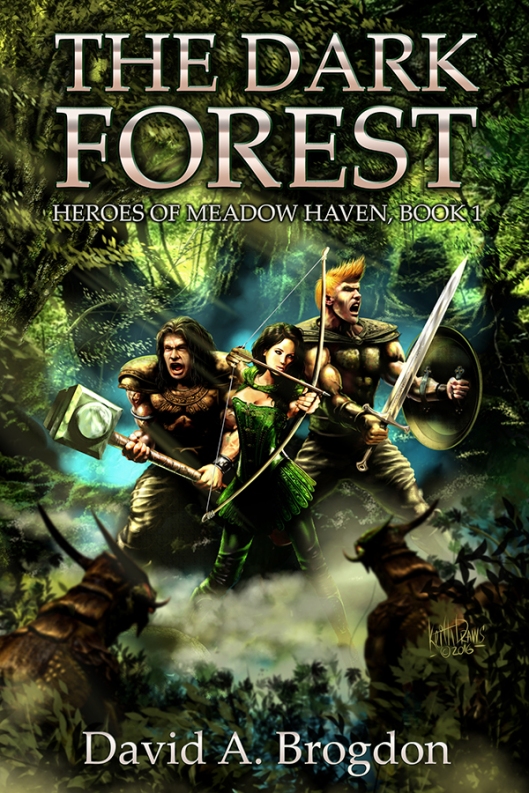 Now I don’t want to just copy the style of Frank, no, I want to pay homage by creating a piece of work that is clearly inspired by him, while being essentially my work. And it also must sell the book it is painted for by reflecting the atmosphere, characters and excitement contained therein.
David A. Brogdon gave me that opportunity recently. I read the book and discussed the concepts with him and above is the result.
I don’t think I’ll ever be able to express my appreciation for the impact Frank has had on my life but this kind of work goes some way toward that.

And How Those Dreams Came True.

As a youth I spent hours in bookshops, looking for scifi and fantasy art on book covers. I’d find a few I liked, buy them and when I got home, I’d study the art and try to learn how to do it. I dreamed about doing that kind of art for a living.

Jim Burns, Todd Lockwood, Peter A. Jones,  Chris Foss, Chris Achilleos,  Frank Frazetta, Boris and Julie Bell, Bruce Pennington and Peter Elson (to name but a few) were major influences. In the past few years, I’ve even been lucky enough to get to know a few of these people.

Even more amazing I actually now get paid to do work in that genre. I produce a lot of Sci fi images for the Great and Prolific Author Richard Tongue. In fact, I’ve done more than twenty illustrations for him to date, and they just get more challenging every time.

Always pursue your dreams. It’s worth it.

Here are a few of the more recent covers I’ve done for Richard: 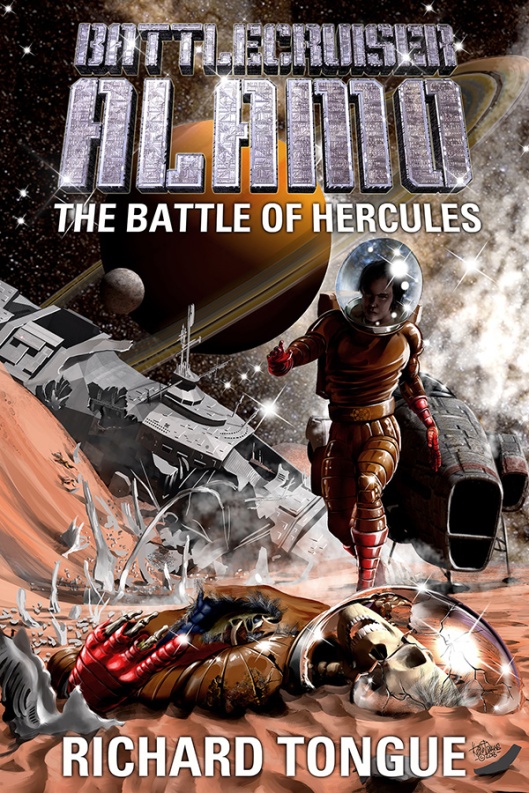 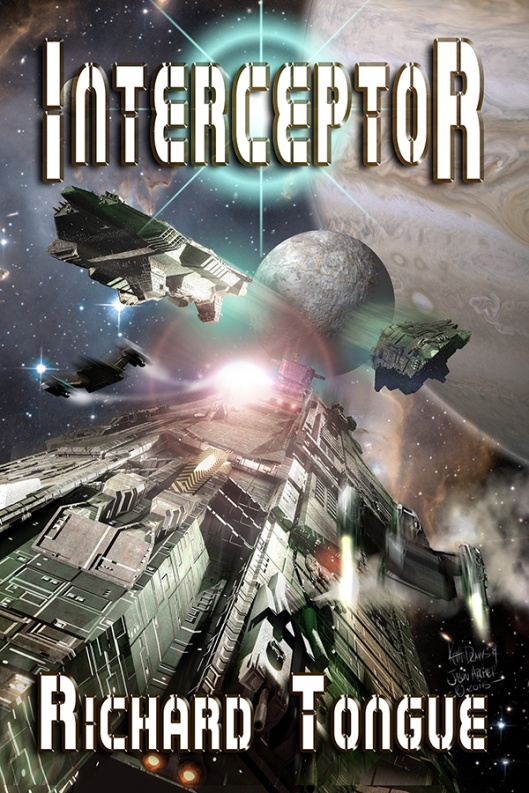 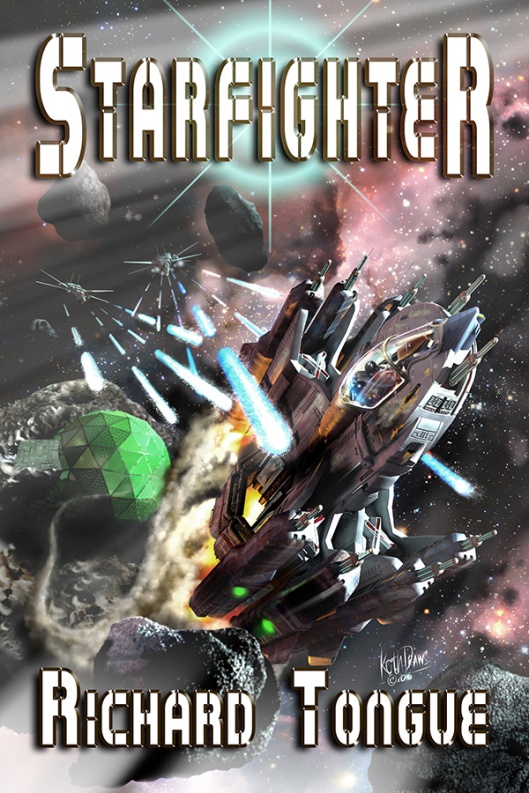 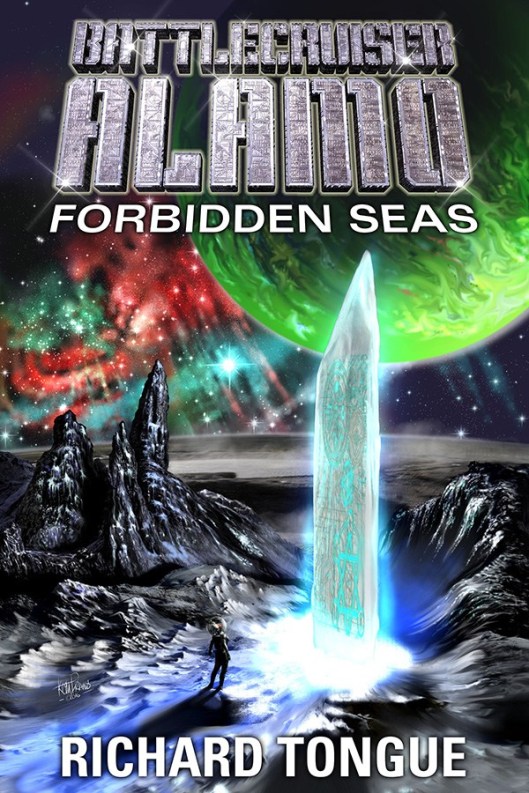 The cover for “Battlecruiser Alamo-Stars in the Sand” by Richard Tongue. 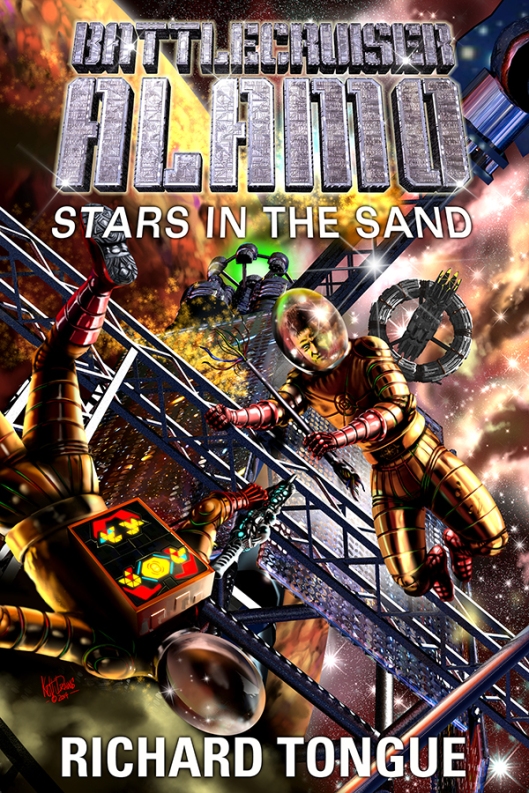 I’m always trying to go for an updated “Amazing Stories” type image with this work since I love that stuff so much.
Posters and high res here

This is the cover for “Galileo’s Step Daughter” by Amanda McCarter.

The first of a Trilogy for which I am producing all the covers. 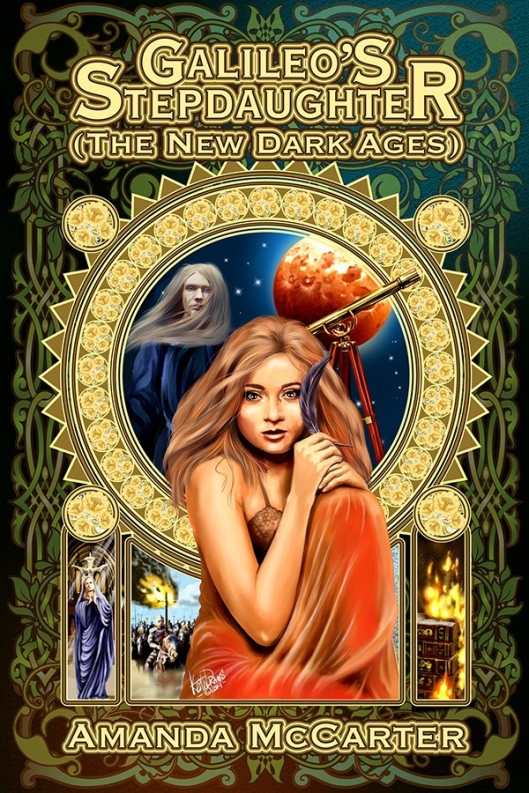 I’m using key elements and characters from the story.
The style is inspired somewhat by the work of Mucha. 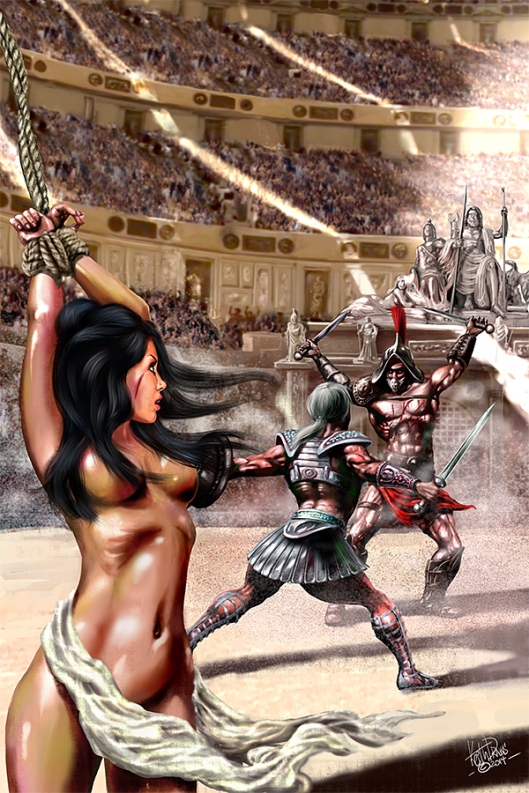 After discussing the various elements involved in each story we initially tried a montage, but Jerrold decided he prefers to go for something with more action. Almost like a traditional pulp cover.

It was quite a daunting subject and I spent a lot of time collecting reference. In my fictional coliseum I wanted to include some of the Roman Gods so in the background, you see Jupiter (King of the Gods) Mars (God of War) and Venus (God of love). I also felt it would need a great crowd bristling with excitement.

The battle is taking place in the late afternoon, the sun casting the long shadows and bright light slashes across the crowd, through the breaks in the canvas overhang.

The gladiators battle as the woman looks on, wondering if she will have to live with the grief of losing her love and remain a slave to the older warrior or if her lover can set her free.

You can learn more about Jerrold Mundis and his work here

When Richard approached me to do the cover for the latest book in his highly successful Science Fiction series, I have to say I was a little intimidated. 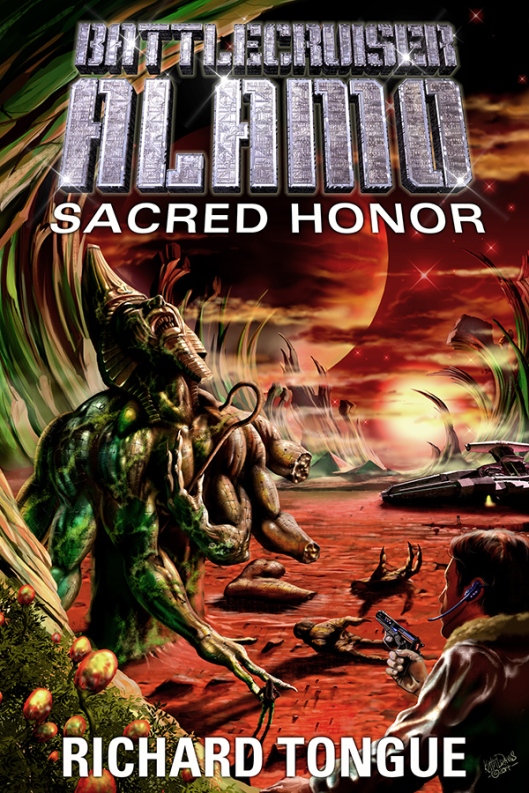 The covers I’ve done for this series prior to this one I consider to be some of my best work.

How was I going to top what I’d already achieved?

I needn’t have worried though. As soon as I read the brief my mind was filled with ideas. and this is the amazing thing about working with Richard.

He has such a powerful vision., and it would bring out the best in any artist.

” The specification for Sacred Honor is a wind-swept plain, with a pair of officers looking up at a ruined, obviously alien statue – one of them Marshall, the other the woman from the cover of Price of Admiralty. (That goes back a bit!) They’re wearing uniform trousers and warmer brown jackets, pistols holstered at their belt. There is a red sun in the sky, casting a faint light. As for the statue – I haven’t got any fixed ideas on it, but I’d like it to evoke that old ‘Ozymandius – King of Kings’ quote. It is old, very old, and crumbling away; some pieces of it are on the ground, there’s a strange mould growing across some of it, pieces missing, that sort of thing.”

I immediately looked up the poem:

“I met a traveller from an antique land
Who said: Two vast and trunkless legs of stone
Stand in the desert. Near them, on the sand,
Half sunk, a shattered visage lies, whose frown,
And wrinkled lip, and sneer of cold command,
Tell that its sculptor well those passions read
Which yet survive, stamped on these lifeless things,
The hand that mocked them and the heart that fed:
And on the pedestal these words appear:
“My name is Ozymandias, king of kings:
Look on my works, ye Mighty, and despair!”
Nothing beside remains. Round the decay
Of that colossal wreck, boundless and bare
The lone and level sands stretch far away.“

And as I opened manga studio 5 I began to think about lost and extinct alien civilizations.

First came the windswept plain and the alien sky. Distant alien mountains. Next, I began to sketch the ancient alien statue. I thought of the Egyptians, I thought of the of the great Frazetta as he painted the work of Edgar Rice Boroughs, and I began to feel a great sense of loss for the civilization that was now expired.  This emotion found it’s way into the statue I was drawing who I realized was now screaming in despair.

Finally, I placed the witnesses to this tragedy, the brave explorers of Richard’s space opera. I landed their ship and sent them exploring the strange and ancient world.
Once the visual was completed I forwarded it to Richard. It looked like this: 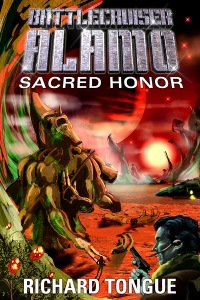 Well, fortunately, Richard liked it and so I went on to complete the work. As you can probably see I made a few minor changes but I think it came out well.

To be honest this kind of work is why I got interested in painting in the first place and I hope it inspires the sense of mystery and the intense desire to know more about the story that it does for me.

You can keep up to date with Richards work here: .http://richardtongue.blogspot.co.uk/

Posters and prints of this image are available here

We post lots of great advice on how to create your own book covers. Just check the Categories bellow.
We also offer custom made covers, illustrated, photomontage or purely typographic, if you don't want to do the work your self.
Any questions feel free to contact us, just click the contact tab above.